Damp in old houses, what is it? Is rising damp a myth?

What does damp in an old house mean, or even in a modern house?

What damp is what in an old house?  Rising damp, hygroscopic salts, salt damp that show up as a damp patch or stained patch, penetrating damp, condensation. This is when a damp survey is needed from a qualified Property Care Association surveyor http://www.property-care.org

What is rising damp?

Rising damp is the upward movement of ground water through the walls of the building, this can be in internal and external walls. The water rises (capillary action) through the pores of brick and mortar etc and the height of rise is determined by the the continuous continuity of the pores, the smaller the pore size the greater the rise, and evaporation.

How high can rising damp rise? 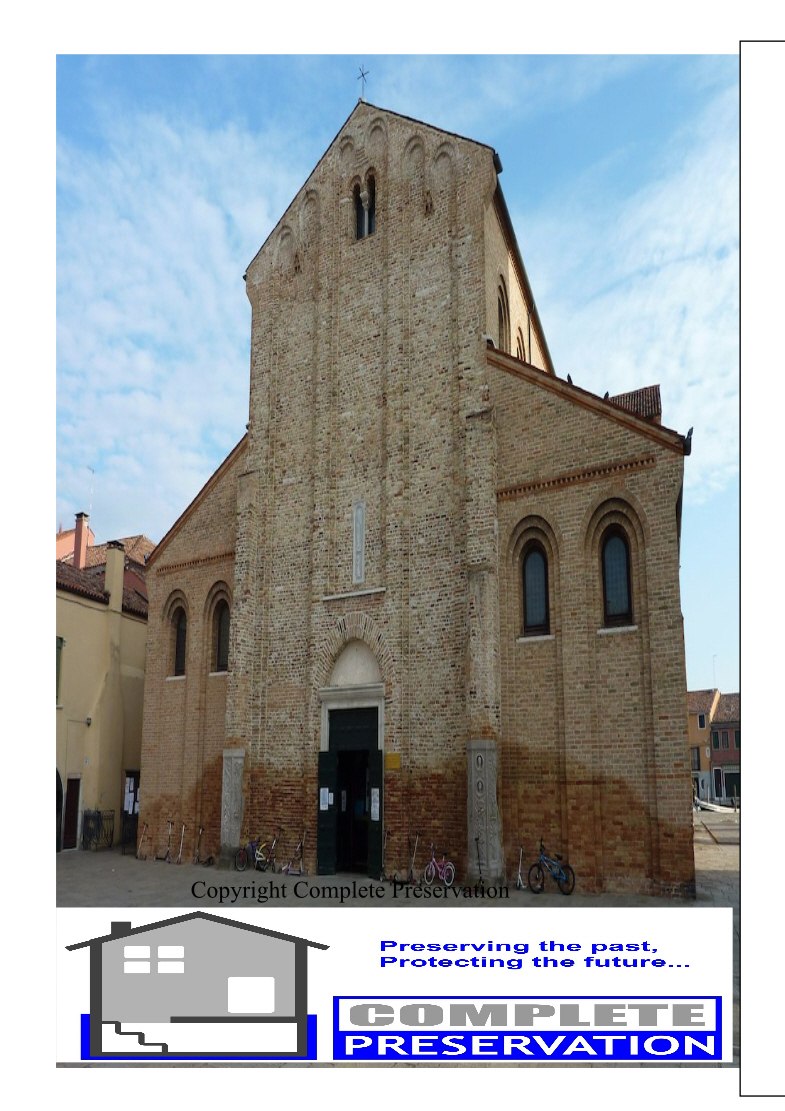 This is one of the questions I mostly here whilst i’m carrying out a survey, most of the public seem to think the height is 1 meter. I’ve recorded rising damp to 2.3 meters on a wall that was covered with bonding internally, I have recorded rising damp on party walls to 1.8 meters and I generally find party walls have the highest height of rise. Rising damp also occurs on lime plastered walls despite what some of the green conservation people say, as they say lime breathes, of course it can’t stop rising damp it’s not a physical damp course.

Generally though rising damp is normally up to 900mm on my BRE Digest 245 results. I think the publics thoughts of rising damp only reaching 1 meter in height is simply because that is normally that height of which the salt resistant re-plastering is normally carried out to. Bre states that under 5% moisture in walls is ok?! I’ve found many walls with 5% free moisture and the skirting boards are rotten and infested with wood boring weevil with paint and paper peeling! What about the type and amount  of hygroscopic salts? This isn’t included in BRE Digest 245 and I think this is very important as this paints the picture of how much free moisture percentage there is, how much hygroscopic salts percentage present , and if you carry out a test for salts and have a salt band with nitrates and chlorides present at 900mm you have the perfect test to prove rising damp is happening at that time and the percentage of hygroscopic salts and that particular type of salt e.g. nitrates and chlorides.

Remember salts move in solution these salts don’t just magically appear in the wall, if you have a hygroscopic salt band between 800mm- 900mm how did they get there? The only way they can get there is from rising damp, so when the anti damp specialists claim that rising damp doesn’t exist, how can that be…….. There is scientific evidence that proves rising damp exists……..

There is no scientific evidence that proves rising damp doesn’t exist! 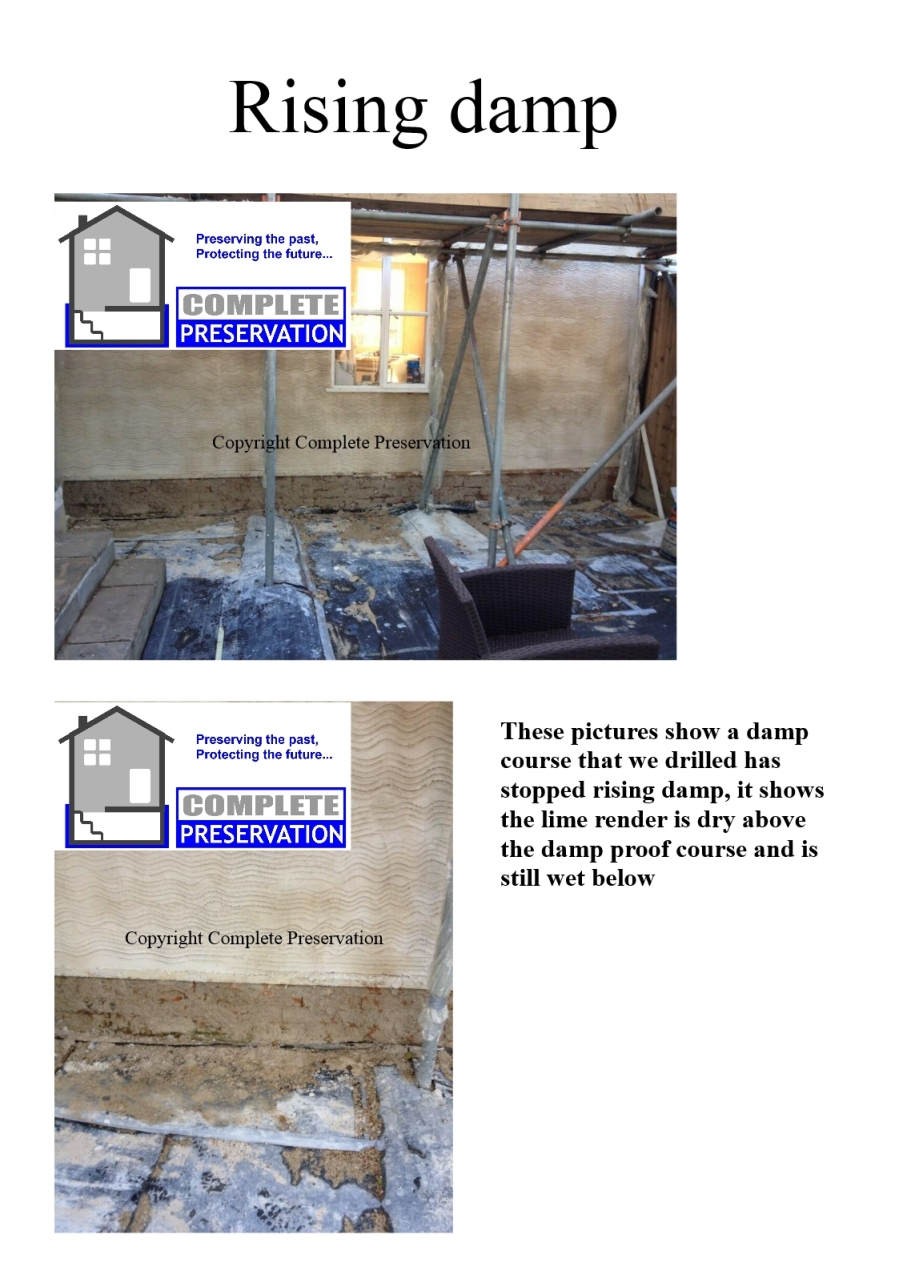 The below pictures showing rising damp on the original lime rendered and  plastered walls. 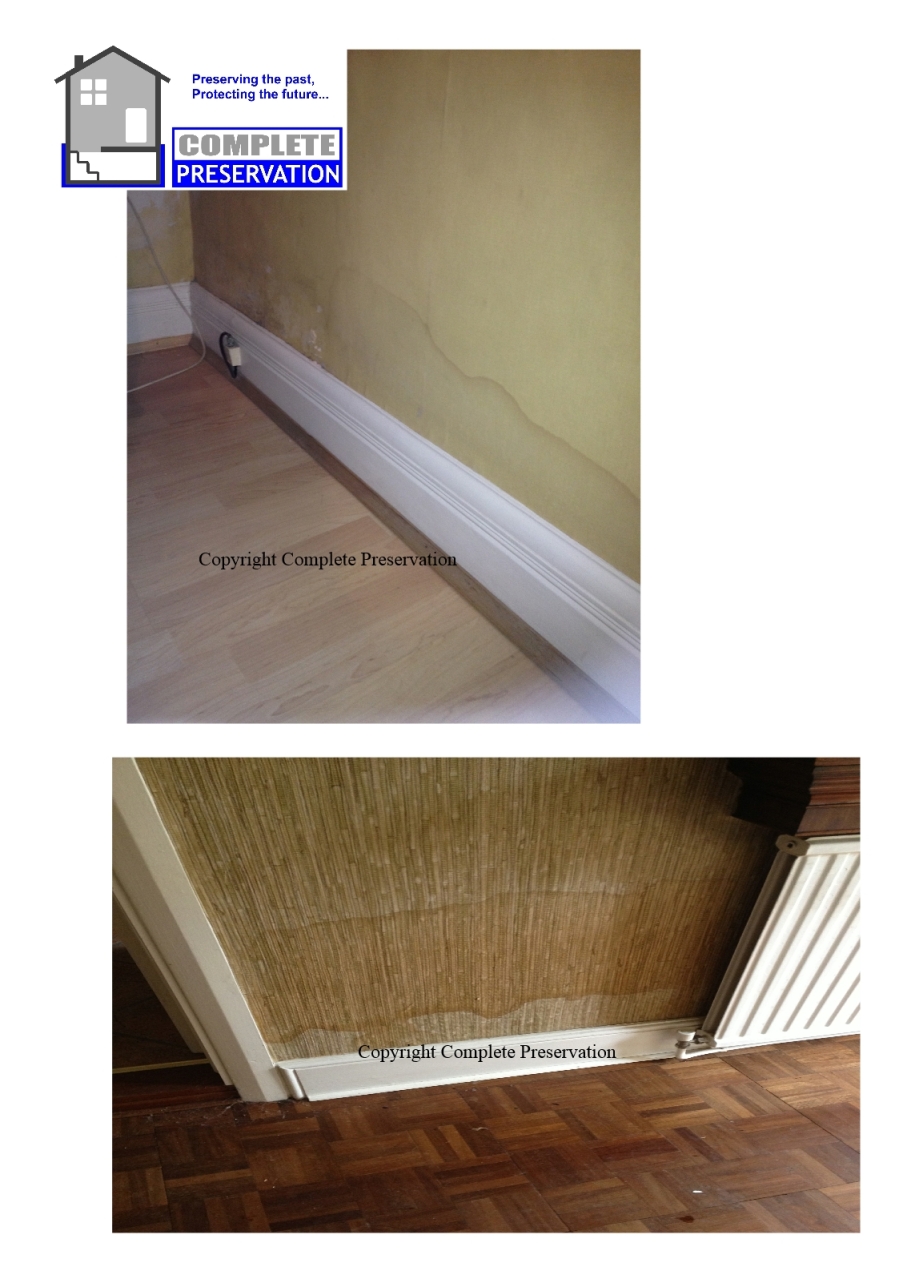 The below picture shows our technician cleaning the cavity as this has caused rising damp because the debris bridged the cavity on an original lime plastered wall. 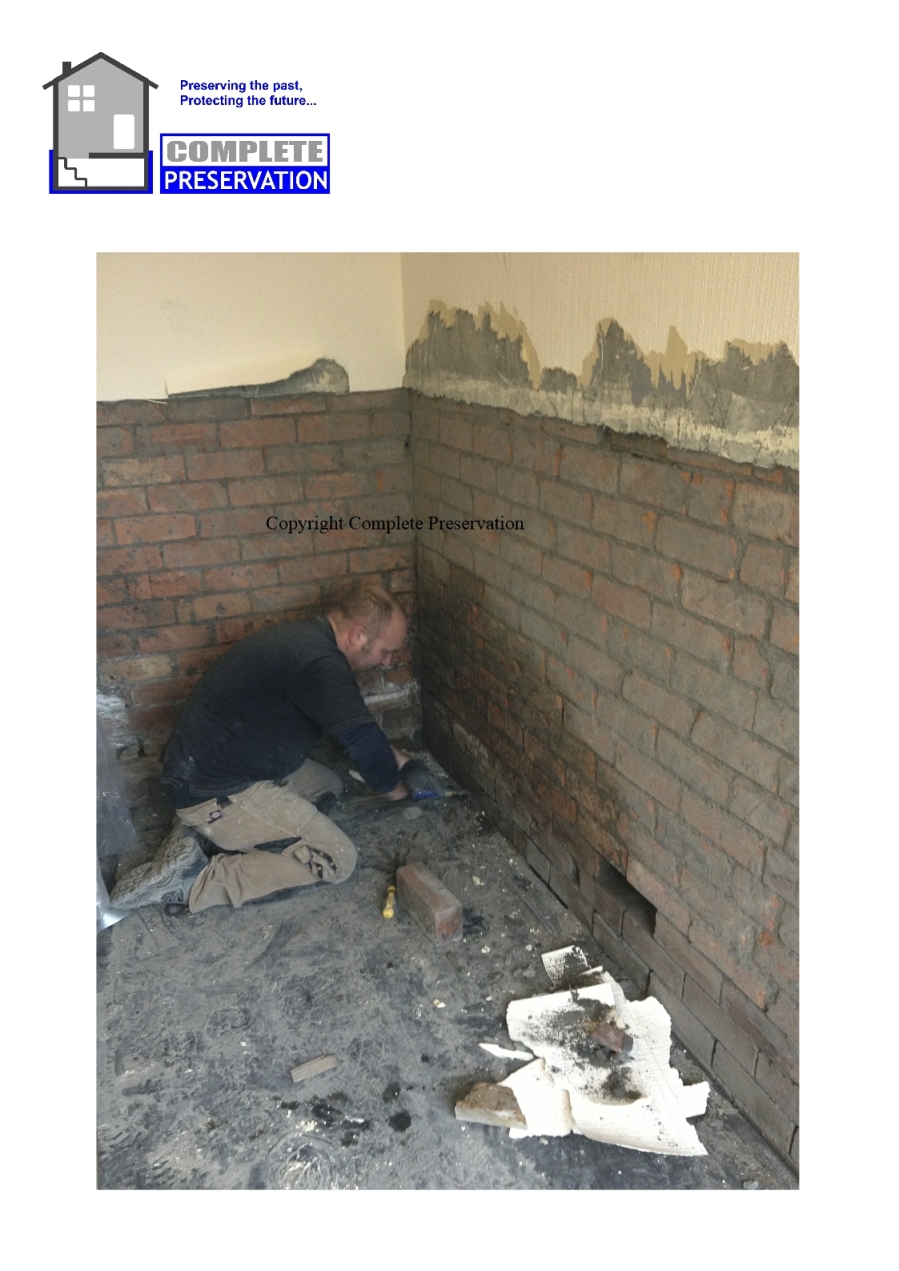 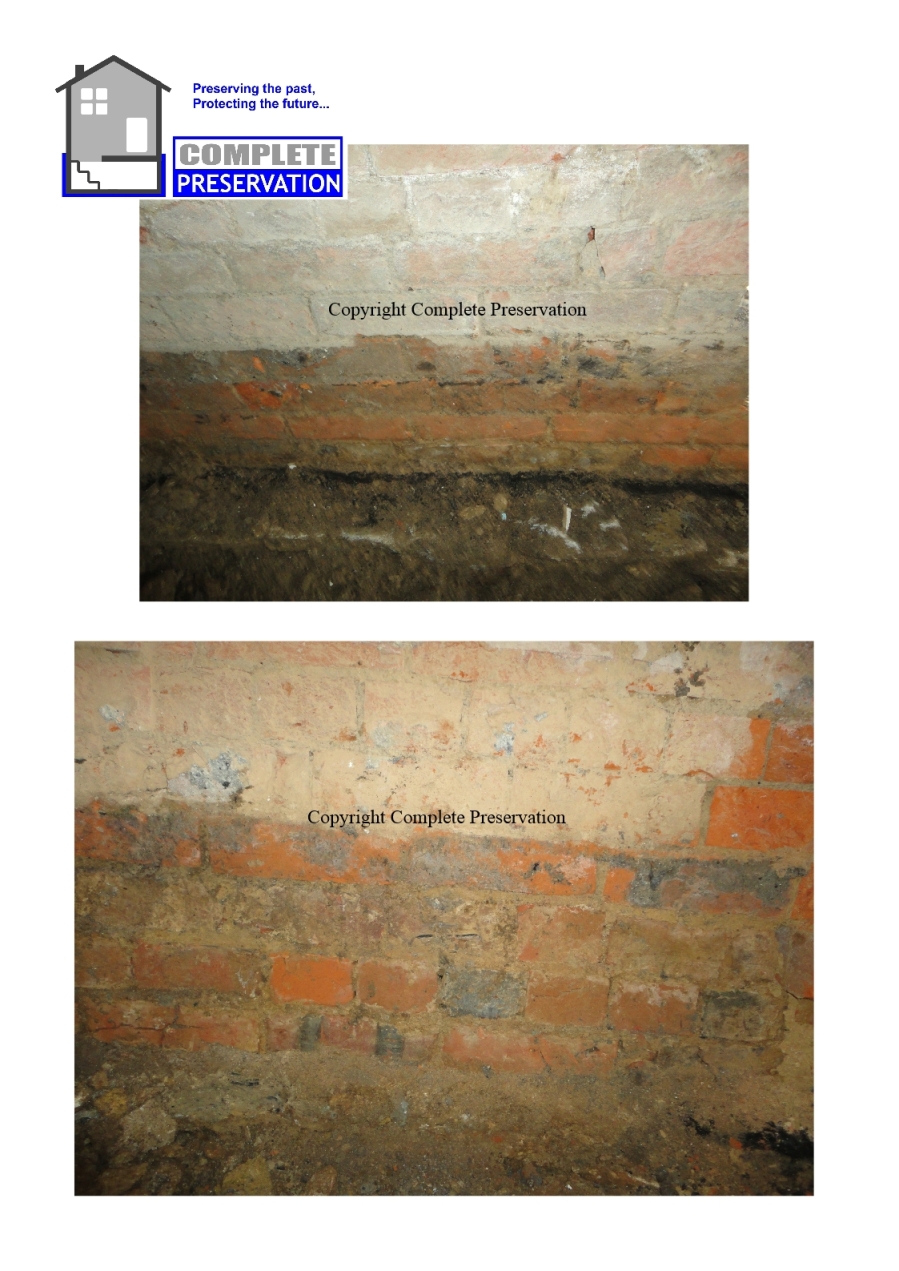 Rising damp facts
The public health act of 1875 introduced the requirement for a dpc in walls to prevent rising damp. The adoption of this Act into local bylaws took some time, though some enlightened builders were already providing a dpc before 1875, this is before chemical injection ever existed.
There are several historic references to rising damp which were published in the 19th Century. An early UK patent describes a flat slab made from a water resistant clay compound which can be placed at the foundation of walls to prevent damp from rising. An article in The Building News in 1862 refers to a method of making walls damp- resistant and an entry in the British Medical Journal in 1872 discusses arresting rising damp with an impervious damp-proof course.
The architect, Thomas Worthington, described rising damp in his 1892 essay, and recommended that the damp course should disconnect the whole of the foundations from the superstructure. This preventative may consist of a double layer of thick slates bedded in cement, or of patent perforated stone-ware blocks or of three-quarters of an inch of best asphalt . It can therefore be seen that the subjects of rising damp and public health were becoming of importance in the latter part of the 19th century.
In a 16th Century building Farnesian in Rome, the damp was found to rise to 1.5 metres on the south side and 3.1 m on the north side. As there was no other difference between the two situations the sun exposure was deduced to reduce the rise by 1.6 m through increased evaporation.
Detailed moisture content measurements were made by the BRE on a total of ninety four 100-year old properties in the Cardiff Bay area. Rising damp was said to occur if the moisture content was above 5%. These were taken in the basement of buildings but included studies on internal walls where no penetrating damp was possible. It was found that 54% of the properties were suffering from rising damp at a height of 0.3 m above floor level.
A useful text on the subject of rising damp is the BRE book “Understanding Dampness” . This gives a description of rising damp consistent with the balance equation above and points out the importance of the water table. If the water table falls the height of rise drops and a new equilibrium position is established. It is noted that soluble salts are drawn up into the structure and become deposited in the wall. When water evaporates, the salt solution becomes more concentrated at the surface and the salts crystallise out of solution. This blocks the pores, reduces evaporation and raises the height of level of dampness. It should be noted that many of the salts are hygroscopic and can absorb moisture from the humid air causing damp patches in the wall. 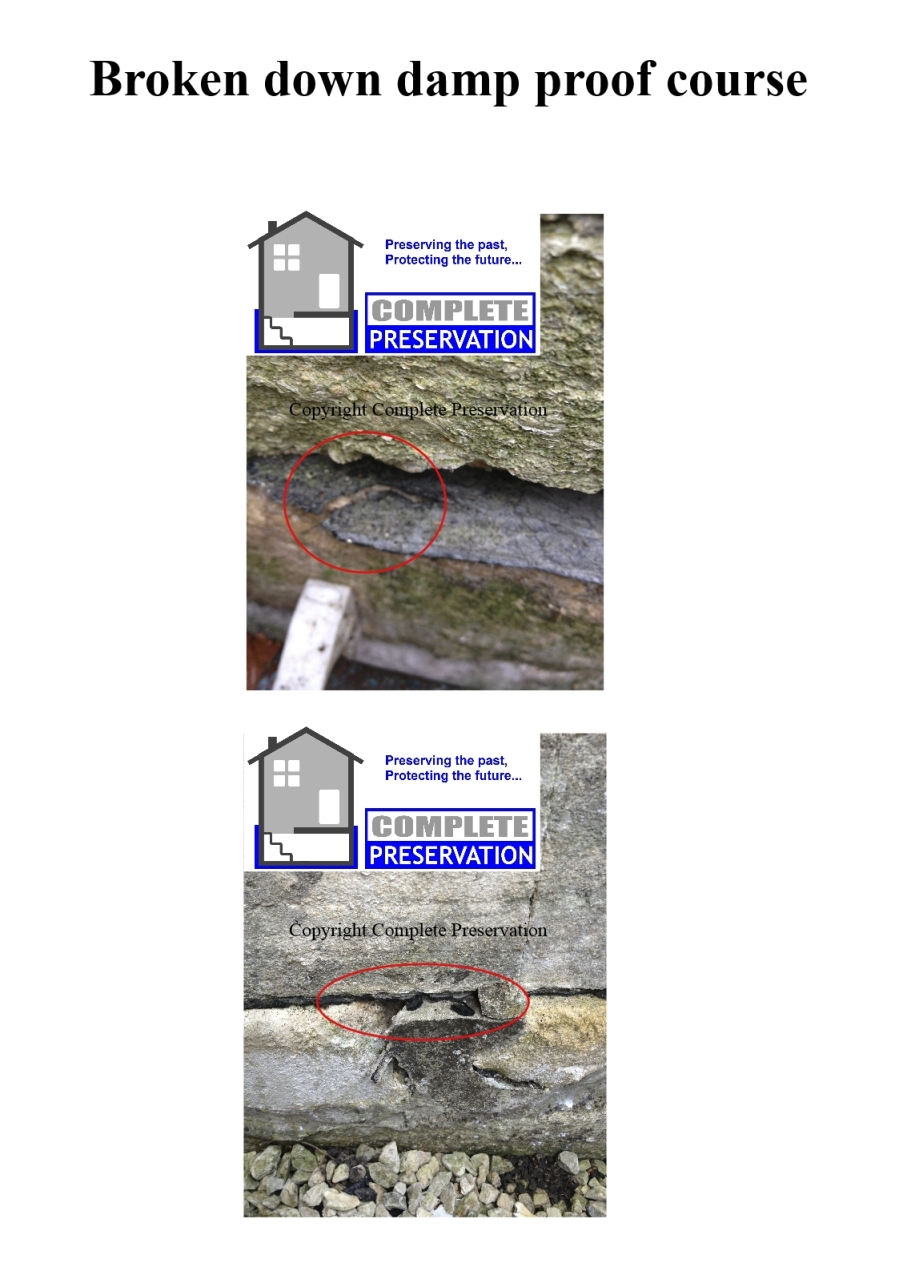 What is hygroscopic salts- salt damp?

The below pictures show hygroscopic salt damp on a chimney, that was confused with a leaking roof. 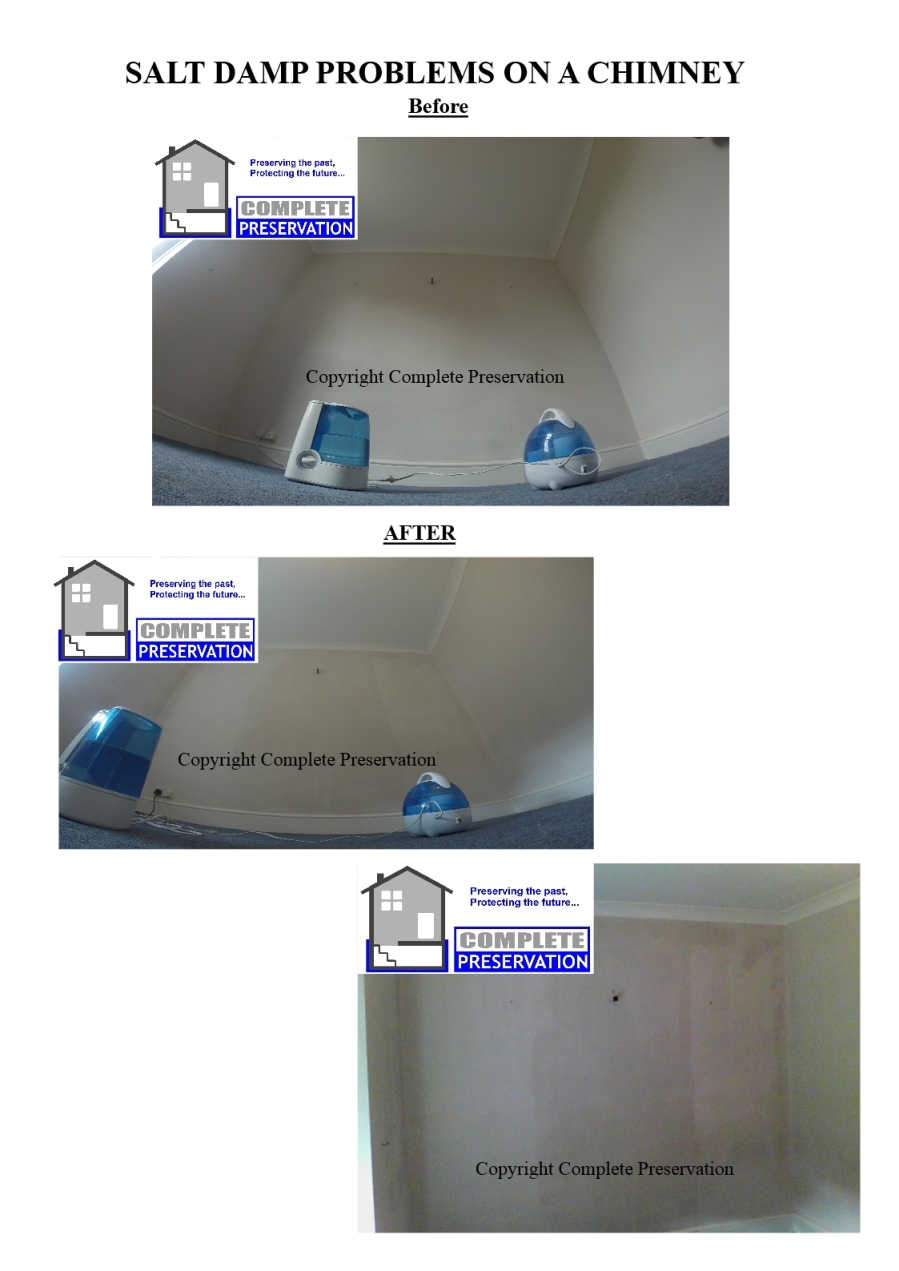 Hygroscopic salts absorb moisture from the air, some salts will be more visible than others depending on the percentage of salts and what salt it is. The humidity will also play a role, if you have high relative humidity there will be more moisture available for the salts to absorb. If there has been long term rising damp normally there will be a salt band present, this may not be visible when the relative humidity is low but this would show up on a BRE Digest 245 test and salt analysis and will also on a damp meter. Normally nitrate and chloride salts will be present.          The salt band is normally present at the height of rise, the evaporation zone. 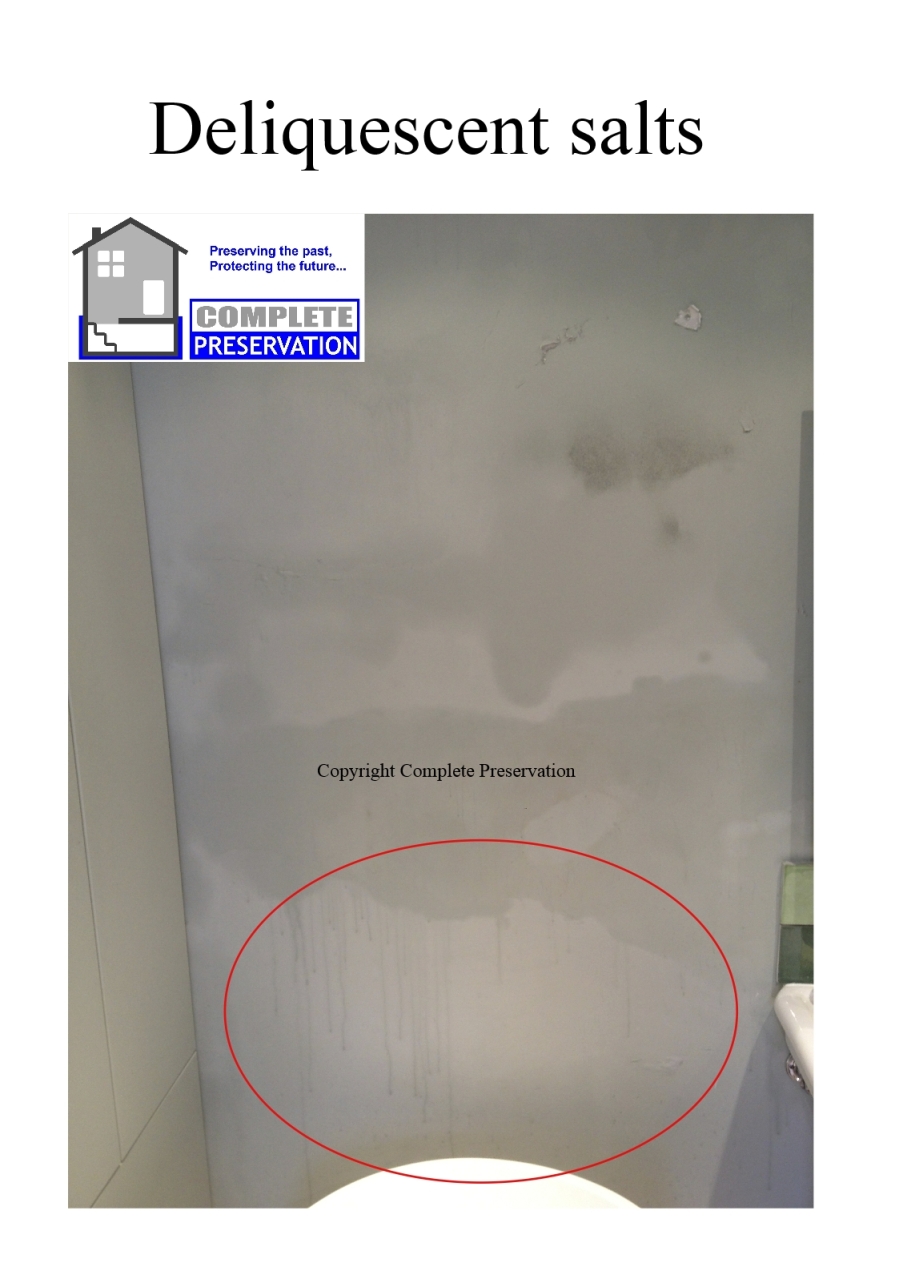 Most efflorescent salts are sulphates, they indicate the passage of water through the material. 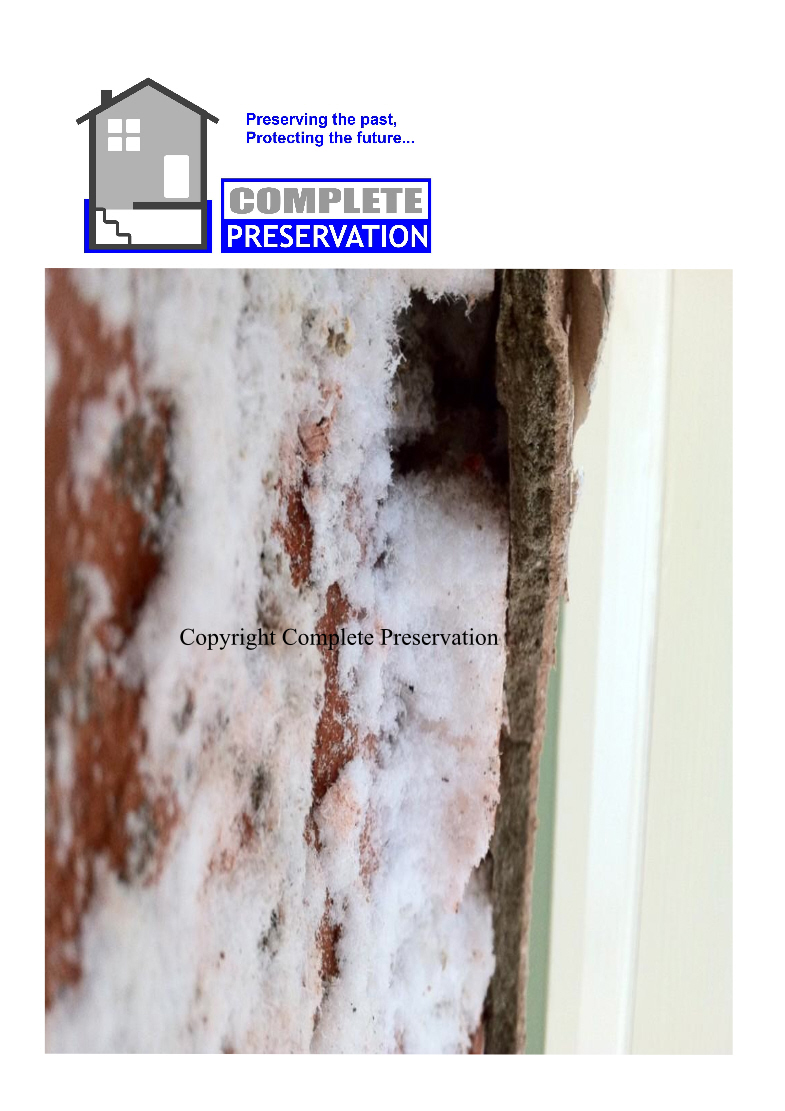 Penetrating damp is damp penetrating the building, normally this is from defects such as leaking guttering and defective flashing. 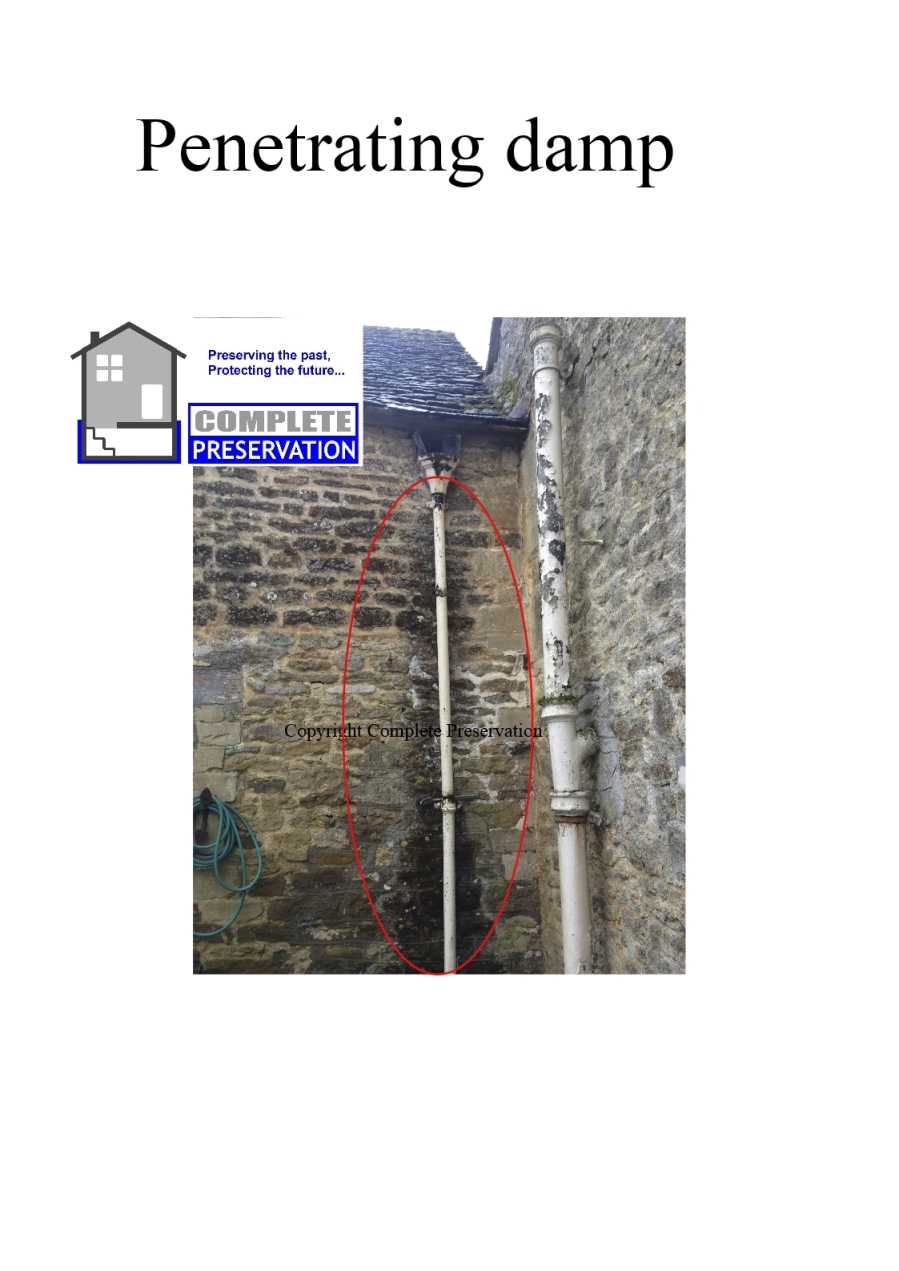 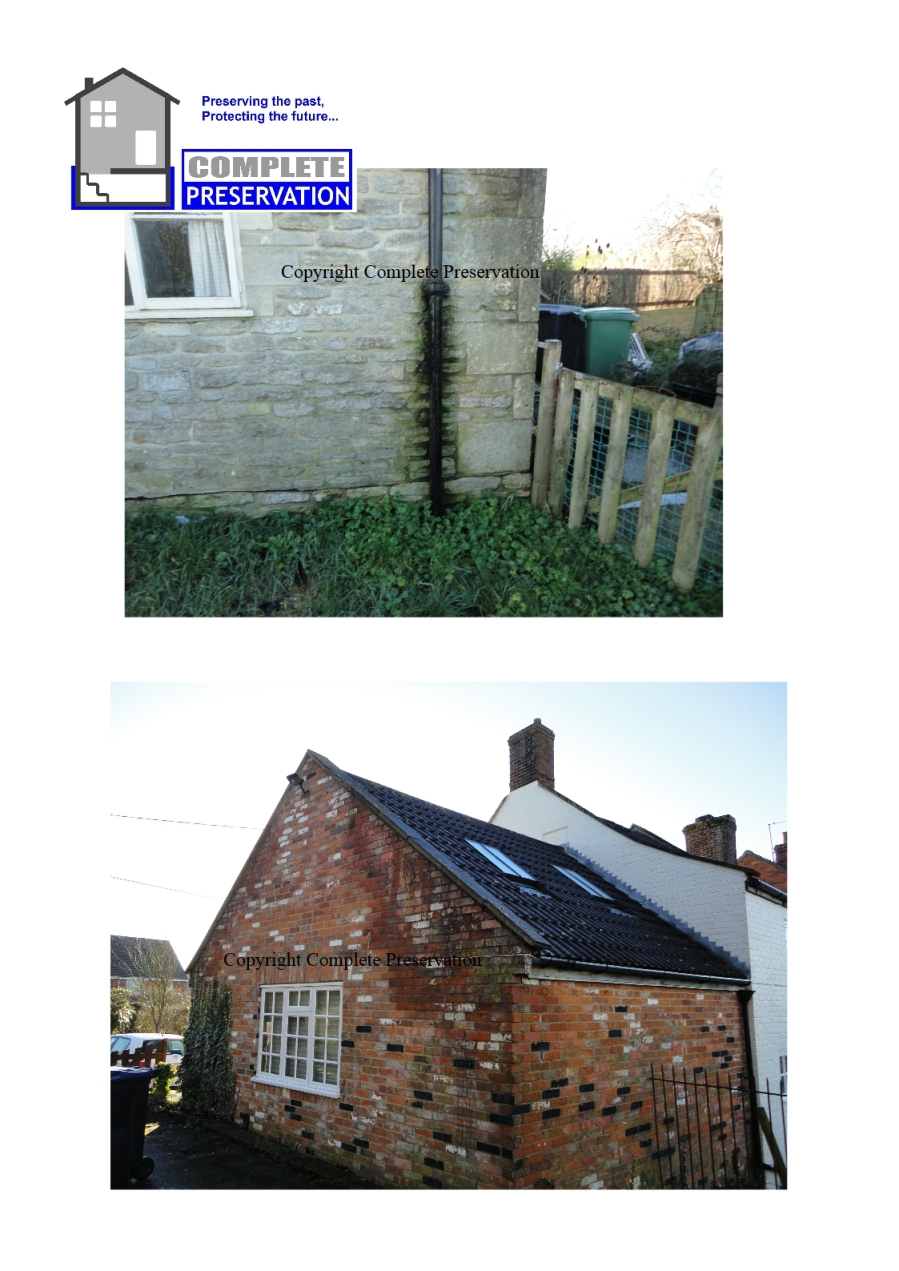 Condensation normally occurs between October and April and is generally caused by the internal living conditions.  A balance between ventilation, heating and thermal performance of materials to control a condensation problem long term. 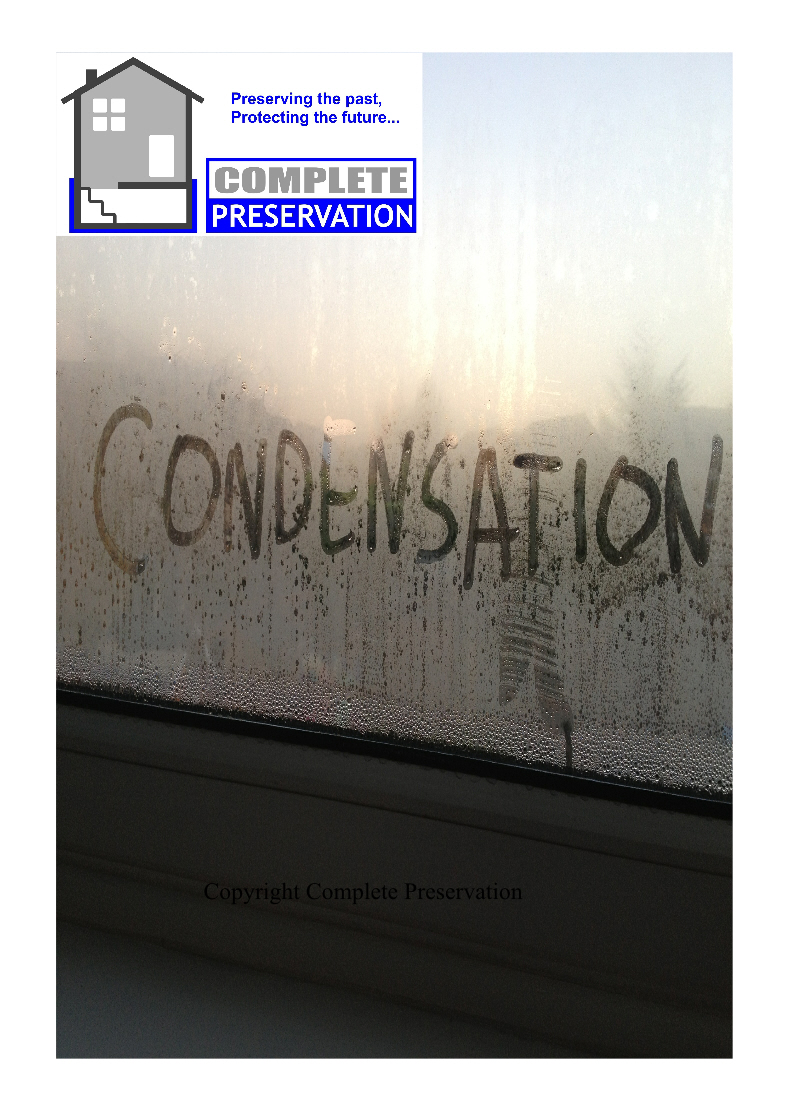 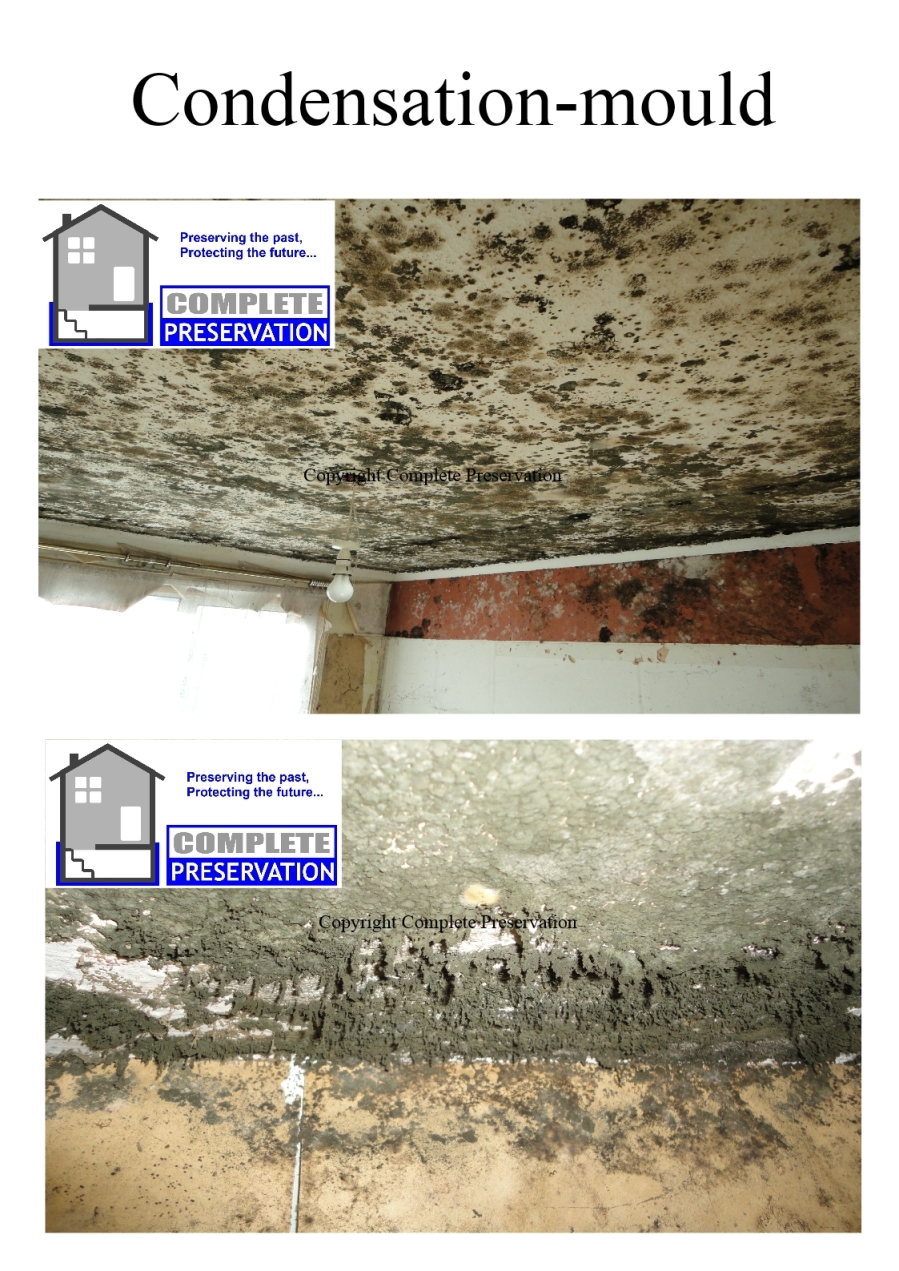 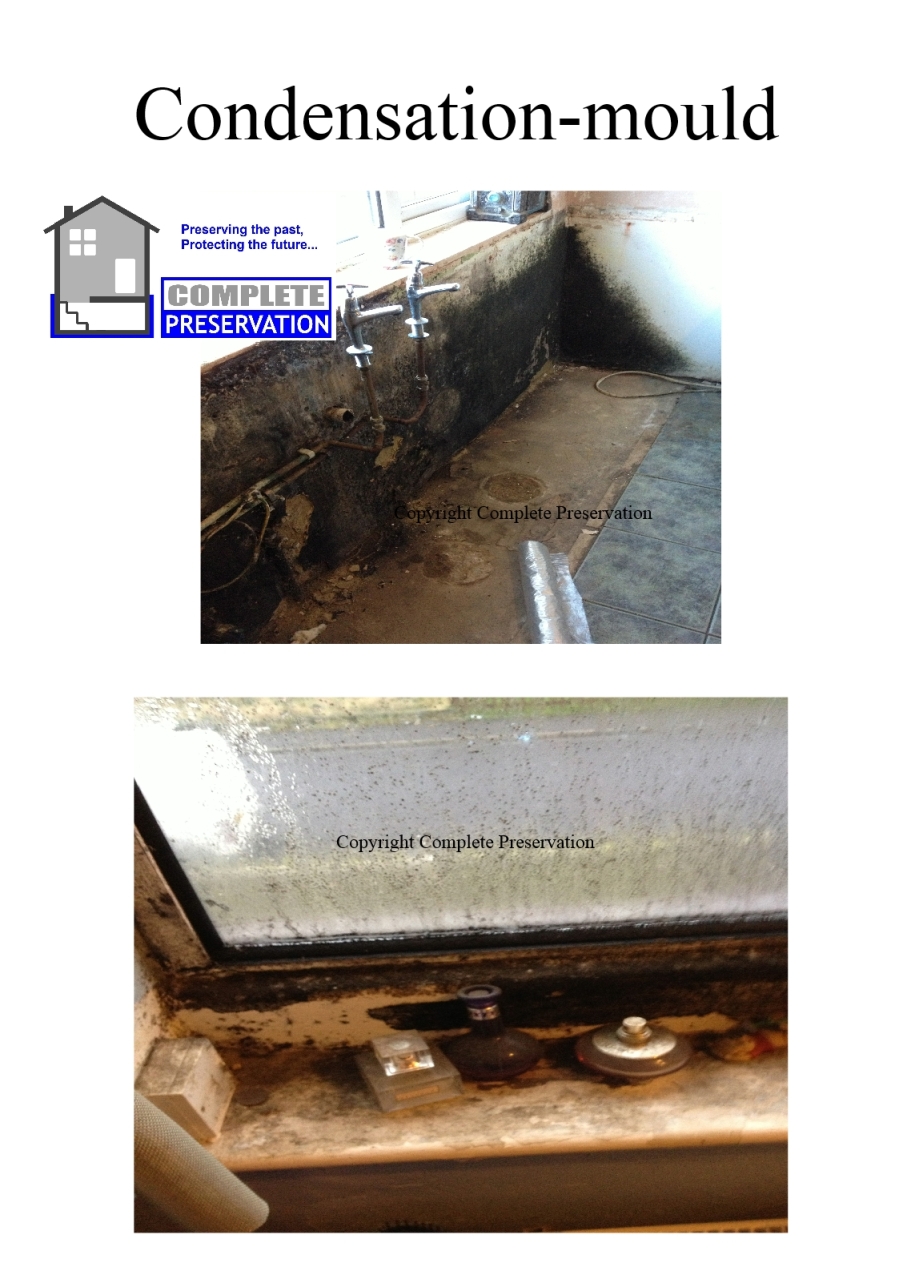 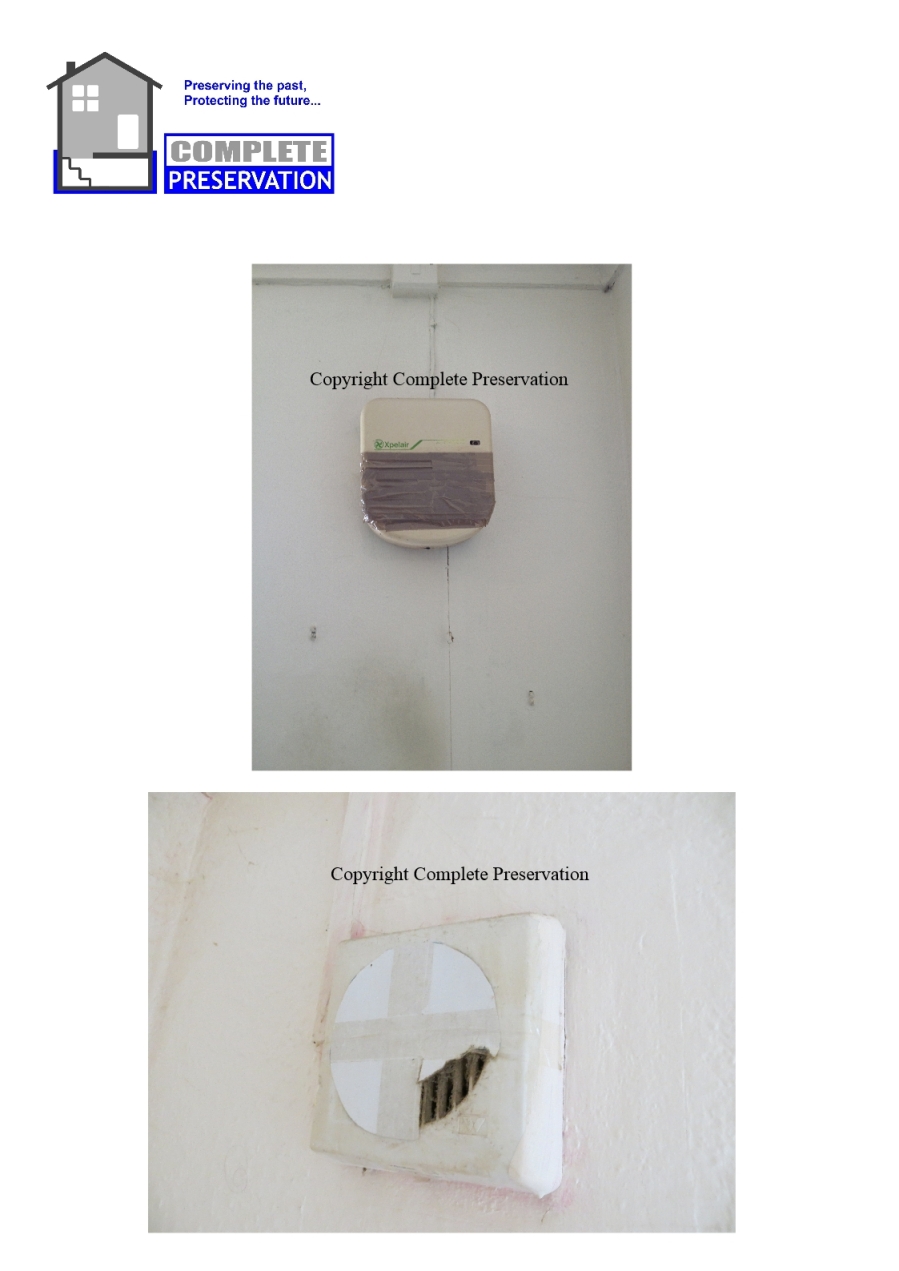